Why Seeding Your Content is Key to Making it Viral 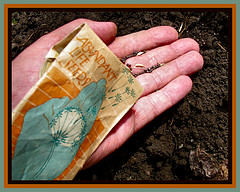 Is great to see scientific research being done on social media, viral videos, and marketing in general (see previous post on the New Science of Viral Ads). Problem is, many research papers contradict each other. A recent study published on Marketing Journal titled “Seeding Strategies for Viral Marketing: An Empirical Comparison” (requires registration), by Oliver Hinz, Bernd Skiera, Christian Barrot, & Jan U. Becker, tries to get some of the contradictions resolved when it comes to what makes something “go viral“.

According to the authors, there are four critical factors for viral marketing success:

1: Content, or the attractiveness of a message makes it memorable

2: The structure of the social network

3: The behavioral characteristics of the recipients and their incentives for sharing the message

4: The seeding strategy, which determines the initial set of targeted consumers chosen by the initiator of the viral marketing campaign

The authors attribute the fourth component, Seeding Strategy, the higher weight. It’s all about who you are sending your video to, they say.

“Seeding the “right” consumers yields up to eight times more referrals than seeding the “wrong” ones” – Hinz, Skiera, Barrot, Becker

So how do you go about “seeding” it right? Here’s where many researchers disagree. There are typically three types of people you can target: 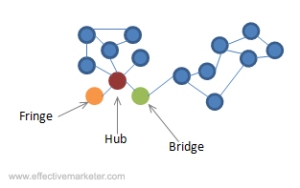 Hubs tend to be better informed because of their social links and they can also influence their networks (hey, if I got this from Bob it must be good!). However, Hubs may not be optimal channels because if the person that acts as a hub doesn’t like or doesn’t agree with the content, they will not pass it on to their network. As big targets for new content, hubs are constantly bombarded with information and therefore may ignore or not see your new content which will prevent it from being spread.

Adoption of a new idea can then start at the “fringes” and make its way through the network. It has also been argued that fringes are more easily influenced than hubs and therefore may be good targets for spreading content. Bridges, for their ability to connect different areas of a network have also been targets because they can influence a portion of the network otherwise immune to the ‘viral’ content you have created.

In their research, the authors encountered four studies that recommend seeding hubs, three recommend fringes, and one recommends bridges. No wonder there is so much confusion when it comes to social media and viral videos! They then conducted experiments to prove those theories to the test to see which one would emerge as the winning seeding strategy.

The result was that “Marketers can achieve the highest number of referrals, across various settings, if they seed the message to hubs or bridges“. They also go on to say that “companies should use social network information about mutual relationships to determine their viral marketing strategy”.

Check out a summary of the study and results published by the authors on SlideShare (link below):

Understanding the social structure of potential networks is an important part when planning your social strategy. It pays off then for companies to mine the data they already have about their customers in order to determine the best people to seed your campaign. If high-connected people are picked to seed the campaign, the probability that it will spread is greatly increased.

Finally, it remains to be seen whether Facebook and other social networks will start playing a very active role in providing companies with detailed network information in order to help with their seeding efforts. Companies already have access to demographics, is just a matter of expanding the data set and, of course, avoiding potential privacy concerns.

This entry was posted on Thursday, April 26th, 2012 at 9:00 am and is filed under Content Marketing, Marketing Strategy, Online Marketing. You can follow any responses to this entry through the RSS 2.0 feed. You can leave a response, or trackback from your own site.